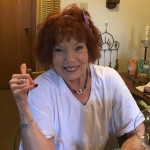 Patricia Ann Fowler, 75, passed away January 8th at the Bowling Green Nursing and Rehabilitation Center in Bowling Green Kentucky. A native of Ownesboro Kentucky, Pat was born to the late Virginia May and Charles Joseph Manion. Pat is survived by her husband of 52 years, Robert Allen Fowler, her two daughters Zarah Elise Goatee, Owensboro KY; and Amanda Lea Niedwick, Bowling Green KY; sister Judy Thornberrry, Louisville KY; Kay Ledesma, Salinas CA; and brother Bob Manion, Owensboro KY. She was preceded in death by her brother Charles Joseph Manion III, Mableton GA. She had four grandchildren, Kanani Braden, Kristine Bantilan, Zac Dela Cruz, Amelia Niedwick; seven great grandchildren, and several nieces and nephews. Pat was a free spirit with a keen sense of style who loved being in the sun and adored the ocean. She was completely devoted to her family, a loyal companion, and hard working. She was a loving mother, daughter, sister, and friend.

A celebration of life service will be held by the family on January 26th at the Hampton Inn & Suites by Downtown Owensboro/Waterfront at 2 in the afternoon. In lieu of flowers expressions of sympathy may take the form of contributions to the American Lung Association or to the St Jude Children's Research Hospital. Arrangements have been entrusted to J.C. Kirby & Son Lovers Lane Chapel.

American Lung Association of Kentucky
P.O. Box 9067
Louisville, KY 40209-0067
St. Jude Children's Research Hospital
PO Box 1000
Memphis, TN 38105
St. Jude is unlike any other pediatric treatment and research facility. Discoveries made here have completely changed how the world treats children with cancer and other catastrophic diseases. With research and patient care under one roof, St. Jude is where some of today's most gifted researchers are able to do science more quickly.