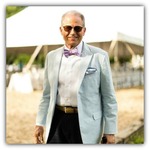 He worked and lived on the Meng family farm in Woodburn for many years and built the Angus herd into a nationally respected seed stock producer. He was known throughout the purebred cattle industry as an expert in Angus pedigrees and cow families and was a respected judge, consultant and breeder who served on the boards of both the Kentucky and American Angus Associations and was an inductee in the Angus Heritage Foundation. He managed the American Angus Futurity for many years and promoted the breed with a fervor matched only by his love of college basketball and music.

As a student, Joe was active in FFA, serving as state vice-president, Kentucky Jr. Angus Association, serving as the first state president, Lambda Chi Alpha fraternity, and Young Farmers. He worked with 4-H, FFA and Jr. Angus Association judging teams and livestock projects and served in leadership positions for several local and state organizations. He enjoyed several years managing the WKU Ag Expo Center and cherished the relationships he developed with the students he employed and mentored there. He not only worked on and managed the Meng's family farming operation; he consulted for and worked with many breeders, including his long-time employer Shady Brook Angus. He transitioned into positions
with Creekstone Farms Premium Beef LLC that allowed him to delve into the science of beef cattle production and work in many aspects of the industry he loved until his retirement in
2010.

Joe cherished his family and loved the time he spent with his children and grandchildren. He
was a great son, brother, husband, father, Pops and friend. Everyone was interesting in some way and every story deserved to be heard and retold with Joe Bill's special twist.

Visitation and services will be held at J.C. Kirby, Lover's Lane Chapel on Thursday, October 6,
2016. The visitation is at 12pm and the service at 2pm. In lieu of flowers, please make